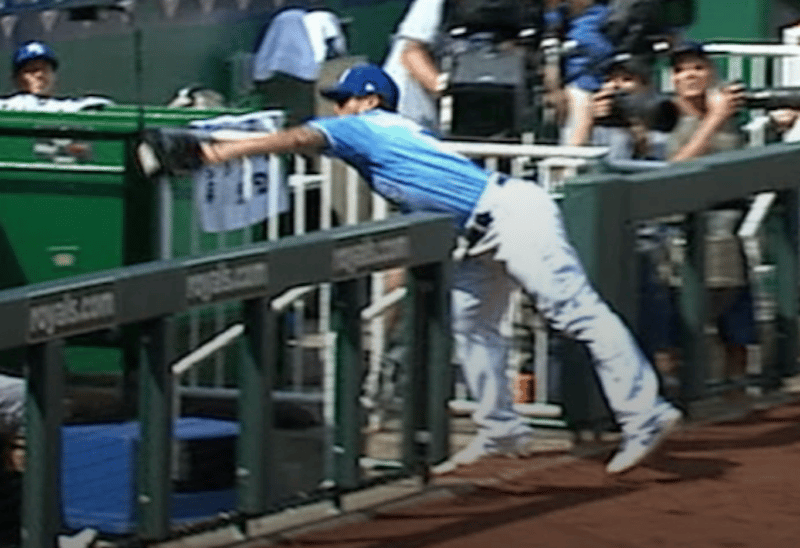 The Royals hosted the A’s in an afternoon game on August 30, 2019. In the top of the eight inning, with Royals runners on second and third and the Royals holding a one-run lead, A’s Corban Joseph lofted a high pop-up near the third base dugout. Royal’s 3B, Chelsor Cuthbert, drifted over to the edge of the dugout where he made a nice catch while leaning over the dugout steps. But immediately after making the acrobatic grab, his momentum carried him down the steps of the dugout.
Third base umpire, umpire Chris Segal, signaled the out for the catch but then awarded all runners one base. This allowed both runners to advance and the A’s scored an important insurance run. Not surprisingly, Cuthbert didn’t know the catch and carry rule as he mentioned to MLB.com:

“At one point when I was getting close to the ball, I looked down to see where I was at — if it was going to be a tough play,” Cuthbert said. “That’s why my first instinct was to hold onto the railing to not fall into the dugout. When the ball was coming down, that’s the only shot I had.

“Then the umpire said the runners were going to advance a base. I didn’t know about that rule. Every day you learn something in baseball.”

No fielder may step into or go into a dugout to make a catch. In order to make a legal catch, the fielder must have one or both feet on or over the playing surface (including the lip of the dugout.) The top step or lip is considered to be outside the dugout.

After a catch, if the fielder steps into the dugout all runners advance one base.

If a fielder steps or falls into the dugout after making the catch, the ball is dead and any runner on base is awarded one base.

If a fielder drops the ball in his attempt to make a throw, the ball is dead and all runners are awarded two bases. This occurred in an Independent League game in New Haven several years ago. There was a runner on first base when the first baseman caught a foul fly ball and carried it into the first base dugout. He remained on his feet. The runner on first tagged-up and headed to second base. The first baseman, in an attempt to throw the ball, muffed it and the ball fell to the floor of the dugout. The umpires erroneously awarded the runner one base and kept him at second. The runner should have been awarded two bases because the muff of the throw is treated as a throw by an infielder into dead ball territory.

If a fielder is about to fall into the dugout after making a catch, players and coaches from either team can assist the player from falling. It is illegal if a player, coach or manager from the opposing team interferes with the player and prevents him from making a catch.

MLB Outfielder Drops Glove After Catch. Is it Still a Catch?