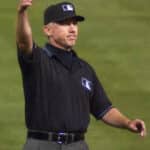 Ump Calls Time Before Pitch The most common “Do-Over” is when an umpire calls “Time” just before the pitcher delivers the pitch. Rule 8.03 (b) (2) empowers all umpires on the field to call “Time” for …