SECTION 26. The immediate removal (or disqualification) of a player or coach from any further participation from the ongoing or current game. The game officials have the authority to eject a player, coach or team representative for misconduct or unsportsmanlike conduct. The offending individual must leave the field and dugout area immediately and is not allowed to communicate with the teams or umpires. The ejected individual must remain out of sight and sound for the remainder of the contest (see 3-6-d, Note 2).

Umpires must file an ejection report with the offending team’s conference administrator and/or athletics director, if applicable. Conferences are encouraged to adopt a reporting policy to satisfy this rule. A post-participation ejection is applicable to the next scheduled contest(s).

a. If a game is protested (before or after an ejection), regardless of the outcome of the protest, the ejection(s) shall be counted and suspensions served, if applicable.

b. If a situation occurs after the last out of a contest and such conduct would result in an ejection during the normal course of play, the umpire(s) shall issue a post-participation ejection. This ejection shall be served in the team’s next contest. If the ejected person is an assistant coach, player or other team personnel, the umpire shall inform the head coach of the ejection, either personally or through the home team game management administrator on site. If the head coach is ejected, the umpire shall inform the coach and/or the game management administrator on site of the head coach’s ejection. The umpire must contact the supervisor or assigner immediately after the contest to report any post-participation ejection. Conferences may impose further penalties if necessary (see Appendix D for full procedures).

c. A post-participation ejection penalty is served in the same manner as any other ejection (see Appendix D).

d. If a player is ejected after removal from the game, he shall serve a postparticipation ejection.

e. Whenever a pitcher is ejected for disputing an umpire’s decision or for unsportsmanlike conduct or language directed at an opponent or umpire (including a post-participation ejection), the suspension will be for a total of four (4) games. This applies whether the ejection occurs while the player is serving as the current game pitcher or after having been removed from the game and his last listed position was that of a pitcher. If a player is removed as pitcher but remains in the game in another capacity such as a designated hitter or at a defensive position and is then ejected, the suspension penalty is one additional game.

f. When an assistant coach, a player (other than a pitcher) or team personnel other than the head coach is ejected for disputing an umpire’s decision or for unsportsmanlike conduct or language directed at an opponent or umpire (including a post-participation ejection), he will receive a one-game suspension in addition to the present game ejection. There will be a threegame suspension for subsequent ejections in the same season. The individual institution will see that all suspensions are served. Assistant coaches and players may not leave their position on the field or dugout area to appeal any play on the field. Head coaches are ultimately responsible for their team’s actions on the field. Although there is a difference between a discussion and an argument, participants, other than the head coach, shall not be the ones to represent their team in communication with the umpire(s).

h. No team personnel may continue to argue or to continue to excessively express themselves with prolonged actions or offensive language after an ejection.

i. When applying the suspension rule, penalties shall be served during the team’s next previously scheduled and completed contest(s). If a previously scheduled game has been postponed or halted, that make-up game against the originally scheduled opponent shall count as a regularly scheduled contest. Games may not be added after the incident in order to fulfill the requirements of this rule (see Rule 5-16, Note 1).

j. If serving multiple suspensions (from a fight or for any penalty) would cause a school difficulty in fielding a team for its next game or games, the institution may request that the suspensions be staggered by its conference office. If the team is an independent, the secretary-rules editor may be contacted for this purpose (see Rule 5-16, Note 2). 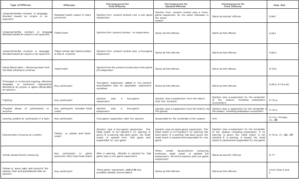 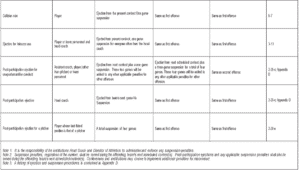 Rule 6.04(d): A manager, player, coach or trainer who has been ejected from a game may not stand in the dugout runway. A manager who has been suspended shall take no part in the direction of his …

Misconduct SECTION 54. Misconduct is any act of dishonesty, unsportsmanlike conduct or unprofessional behavior that discredits the contest, the institutions or intercollegiate athletics.

Suspension SECTION 77. The prohibition of a player or coach from participating in a future contest(s). A game must be played to its completion before it counts toward a suspension. A game that is scheduled, but …

3-3-1   A coach, player, substitute, attendant or other bench personnel shall not: a. leave the dugout during a live ball for an unauthorized purpose; b. fake a tag without the ball; c. carelessly throw a bat; d. wear jewelry (players …