SECTION 1.     a. The runner must touch each base in legal order (first, second, third and home) and, when obliged to return while the ball is in play, must retouch the base or bases in reverse order.

PENALTY—For failure to touch a base advancing or returning: The runner is out if touched by the ball in the hands of a fielder before returning to each untouched base. If the base missed was one to which the runner was forced, the runner is out when tagged or if the ball is held by a fielder on any base the runner failed to touch (including home plate) (see 8-6-a-4).

b. A base runner having acquired legal title to a base cannot run bases in reverse order to either confuse the fielders or make a travesty of the game. A runner violating this rule is out.

c. If a runner is in a run down between bases and the following runner occupies the same base the first runner has left, the second runner cannot be put out while occupying said base. If the first runner, however, returns safely to the base last touched and both runners then are occupying the same base, the second runner is out, if touched with the ball and there is no force.

Note: No runner shall advance on an interference play called on another runner. A runner is considered to occupy a base until he legally has reached and touched the next base. 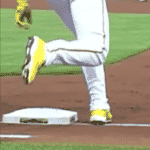 Missing a base on a home run is a rarity on any level of baseball, especially in the major and minor leagues. According to data at retrosheet.com, it appears the last home run in the …

Retouching bases after an out of play award of bases

The slide rule varies from level to level in baseb...

How are you making that call?

So this is a question recently sent out on this we...

When is a batting order official

I was always under the impression exchanging lineu...

NCAA
NCAA 7-11 When Batter or Batter-Runner Is Out
NCAA 8-2 Batter Becomes Base Runner
Was this article helpful?
57
Advertisement