5.02 – After the umpire calls “Play,” the ball is alive and in play and remains alive and in play until, for legal cause, or at the umpire’s call of “Time” suspending play, the ball becomes dead. While the ball is dead, no player may be put out, no bases may be run, and no runs may be scored, except that runners may advance one or more bases as the result of acts which occurred while the ball was alive (such as, but not limited to an illegal pitch and/ or a balk in Intermediate (50-70) Division/ Junior/ Senior/ Big League, an overthrow, interference, or a home run or other fair ball hit out of the playing field).

5.03 – The pitcher shall deliver the pitch to the batter who may elect to strike the ball, or who may not offer at it, as such batter chooses.

5.04 – The offensive team’s objective is to have its batter become a runner, and its runners advance.

5.05 – The defensive team’s objective is to prevent offensive players from becoming runners, and to prevent their advance around the bases.

5.06 – When a batter becomes a runner and touches all bases legally, one run shall be scored for the offensive team.

5.09 – The ball becomes dead and runners advance one base, or return to their bases, without liability to be put out, when –

(a) a pitched ball touches a batter, or the batter’s clothing, while in a legal batting position; runners, if forced, advance (see 6.08);

(d) a ball is illegally batted either fair or foul; runners return;

(e) a foul ball not caught, runners return. The umpire shall not put the ball in play until all runners have retouched their bases;

(g) a pitched ball lodges in the catcher’s or umpire’s mask or paraphernalia; runners advance;

5.10 – The ball becomes dead when an umpire calls “Time.” The Umpire-in-Chief shall call “Time” –

(b) when light failure makes it difficult or impossible for the umpires to follow the play;

NOTE: A league may adopt its own regulations governing games interrupted by light failure.

(c) when an accident incapacitates a player or an umpire;

(d) when a manager requests “Time” for a substitution, or for a conference with one of the players; (NOTE: Only one offensive time-out, for the purpose of a visit or conference, will be permitted each inning.)

(e) when the umpire wishes to examine the ball, to consult with either manager, or for any similar cause;

(f) when a fielder, after catching a fly ball, falls into a stand, or falls across ropes into a crowd when spectators are on the field, or any other dead-ball area. As pertains to runners, the provisions of 7.04(b) shall prevail. If a fielder after making a catch steps into a dead ball area, but does not fall, the ball is alive and in play and runners may advance at their own peril;

(g) when an umpire orders a player or any other person removed from the playing field;

(h) except in the cases stated in paragraphs (b) and (c)(1) of this rule, no umpire shall call “Time” while a play is in progress.

Videos Related to 5.00 Putting the Ball in Play – Live Ball 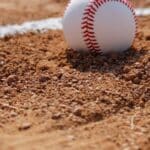 Little League
1.00 Objectives of the Game
2.00 Definition of Terms
Was this article helpful?
92
Advertisement