(Infield Fly) Comment:
On the infield fly rule the umpire is to rule whether the ball could ordinarily have been handled by an infielder-not by some arbitrary limitation such as the grass, or the base lines. The umpire must rule also that a ball is an infield fly, even if handled by an outfielder, if, in the umpire’s judgment, the ball could have been as easily handled by an infielder. The infield fly is in no sense to be considered an appeal play. The umpire’s judgment must govern, and the decision should be made immediately.
When an infield fly rule is called, runners may advance at their own risk. If on an infield fly rule, the infielder intentionally drops a fair ball, the ball remains in play despite the provisions of Rule 5.09(a)(12) (Rule 6.05(l)). The infield fly rule takes precedence.
If interference is called during an Infield Fly, the ball remains alive until it is determined whether the ball is fair or foul. If fair, both the runner who interfered with the fielder and the batter are out. If foul, even if caught, the runner is out and the batter returns to bat. 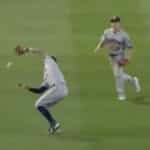 When the Umpire Messes up an Infield Fly

Umpires are human so sometimes they make calls that make no sense, like calling an Infield Fly with no runner at 2B. It happens quite a bit at the amateur level and often causes chaos …

Infield Fly SECTION 48. A fair fly ball (not including a line drive or an attempted bunt) that can be caught by an infielder with ordinary effort, when first and second or first, second and third …

2-19 An infield fly is a fair fly (not including a line drive nor an attempted bunt) which can be caught by an infielder with ordinary effort, (rule does not preclude outfielders from being allowed …

8-4-1   The batter-runner is out when: he intentionally interferes with the catcher’s attempt to field the ball after a third strike; his fair hit or foul (other than a foul tip which is not a third …

MLB
Conduct and Responsibilities of Umpires
General Instructions to Umpires
Was this article helpful?
130
Advertisement