SECTION 4. The intent of the force-play-slide rule is to ensure the safety of all players. This is a safety and an interference rule. Whether the defense could have completed the double play has no bearing on the applicability of this rule. This rule pertains to a force-play situation at any base, regardless of the number of outs.

a. On any force play, the runner must slide on the ground before the base and in a direct line between the two bases. It is permissible for the slider’s momentum to carry him through the base in the baseline extended (see diagram).
Exception—A runner need not slide directly into a base as long as the runner slides or runs in a direction away from the fielder to avoid making contact or altering the play of the fielder. Interference shall not be called.

1) “On the ground” means either a head-first slide or a slide with one leg and buttock on the ground before the base.

2) “Directly into a base” means the runner’s entire body (feet, legs, trunk and arms) must stay in a straight line between the bases. 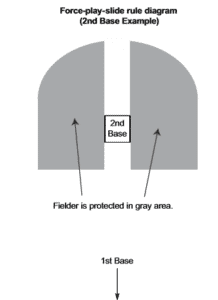 b. Contact with a fielder is legal and interference shall not be called if the runner makes a legal slide directly to the base and in the baseline extended (see diagram). If contact occurs on top of the base as a result of a “pop-up” slide, this contact is legal.

c. Actions by a runner are illegal and interference shall be called if:

1) The runner slides or runs out of the base line in the direction of the fielder;

2) The runner uses a rolling or cross-body slide and either makes contact with or alters the play of a fielder;

3) The runner’s raised leg makes contact higher than the fielder’s knee when in a standing position;

4) The runner slashes or kicks the fielder with either leg; or

5) The runner illegally slides toward or contacts the fielder even if the fielder makes no attempt to throw to complete a play.

PENALTY for 1-5—1) With less than two outs, the batter-runner, as well as the interfering runner, shall be declared out and no other runner(s) shall advance.

2) With two outs, the interfering runner shall be declared out and no other runner(s) shall advance.

3) If the runner’s slide or collision is flagrant, the runner shall be ejected from the contest.

Note 1: If the bases are loaded with no outs, a double-play attempt is made, and interference is called, all other runners must return to their original bases.

Note 2: On a force play, with a two-man umpiring system, if the plate umpire does not have a potential play at the plate, he should move toward the base to observe the runner going into second or third base. In this situation, the base umpire must follow the throw and may not see the true effect of the lead runner’s action. 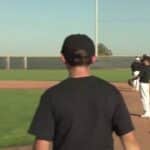 NCAA
NCAA 8-3 Entitled to Bases
NCAA 8-5 When Runners Are Out
Was this article helpful?
133
Advertisement