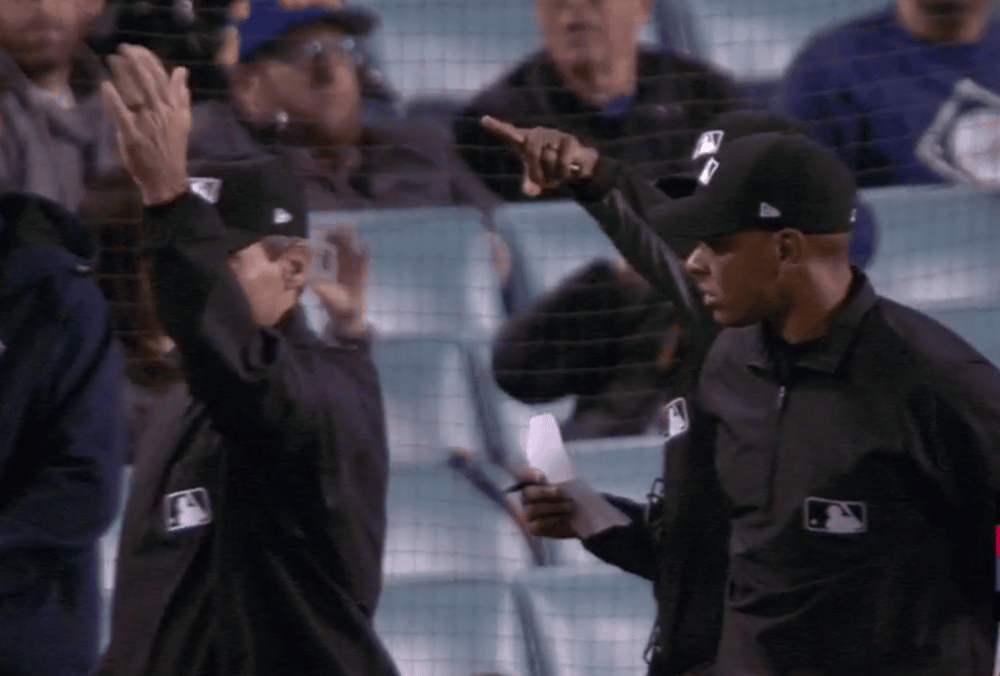 Someone once said, “Patience is the mother of all virtues.” That certainly holds true in the baseball sense. Every major league and minor league manager and bench coach needs to show patience in certain situations to maximize the benefits of the rule book.

As we saw last week, Reds’ interim manager Jim Riggleman showed his patience and knowledge of the batting out of order rule when the Mets batted out of order in the May 9th game. He waited until the improper batter, Asdrubal Cabrera, did something constructive (doubled) before he brought the problem to the attention of the umpire. Two days later (May 11), Riggleman was on the opposing side when Dodgers’ skipper Dave Roberts, showing patience, brought a substitution/lineup card snafu to the attention of the umpires when the Dodgers hosted the Reds.

Following a Max Muncy home run in the bottom of the seventh, Riggleman removed pitcher, Austin Brice, from the game. Prior to going to the pitcher’s mound, Riggleman made a double switch, meeting with umpire Alan Porter. He brought in pitcher Amir Garrett and placed him in the No. 1 spot in the batting order. In doing so, left fielder Jesse Winker, the No.1 batter, would be removed from the game.  Riggleman inserted Adam Duvall in left field, who would bat eighth in Brice’s spot due up second in the eighth inning.

But Winker illegally remained in the game. Instead of going to the dugout he moved to right field replacing Scott Schebler. Because Schebler made the final out in the top of the seventh inning, Schebler assumed Riggleman was removing him from the game and trotted into the dugout.  The umpires never noticed that Winker was on the field and the game proceeded.

So, the stage was set for Roberts and bench coach Bob Geren to pounce on the lineup snafu. Instead of notifying Porter that Winker, not Schebler, should be out of the game when they noticed he was in the game standing in right field, they wisely waited until a pitch was thrown by Garrett to Yasiel Puig. As soon as a pitch was thrown, Roberts notified Porter that Winker did not belong on the field.

The umpires huddled and Angel Hernandez, the acting crew chief, removed Winker from the game. They also prohibited Schebler from re-entering the game. I support their decision.

The common sense question to ask is, why would Schebler be considered a substitute since he was already in the game? Because Schebler was sitting in the dugout with Duvall and Winker on the field while the ball was dead, Schebler would still be an eligible replacement because he was not officially removed from the game.  Perhaps the word substitute would be improper but I, along with the umpires,  believe the intent and spirit of the rule would cover that situation by using the word substitute for Schebler.

Because of this, Riggleman was forced to fill the right field vacancy with Alex Blandino. His one-out appearance in the outfield was reportedly his first as a professional. He was subsequently moved to short while Jose Peraza, who started at shortstop, went to right field. Peraza had never played right field but had experience in the big leagues in left and center. The substitution mishap resulted in the Reds being forced to bat reliever Amir Garrett in the eighth inning. Garrett grounded out 5-3.

If Roberts notified Porter before the pitch, the ump would have ordered Winker off the field and Schebler, or another substitute, to fill the right field position. But Roberts had successfully used rule 5.10 (d) to burn two players, by exercising patience, “the mother of all virtues.”

To view the above, go to the link below.

“If a player who has been substituted for attempts to re-enter, or re-enters, the game in any capacity, the umpire-in-chief, shall direct the player’s manager to remove such player from the game immediately upon noticing the player’s presence or upon being informed of the player’s improper presence by another umpire or either manager.” The umpires should have noticed that Winker remained in the game after being substituted for.