PENALTY FOR A BALK

Under Official Baseball Rule 6.02(a), the penalty for a balk shall be: The ball is dead (when play stops), and each runner shall advance one base without liability to be put out unless the batter reaches first base on a hit, an error, a base on balls, a hit batter, or otherwise and all other runners advance at least one base, in which case the play proceeds without reference to the balk.
The penalty for a balk provides that if a batter reaches first base safely on a hit or error, base on balls, or otherwise on a pitch on which a balk is called, the batter shall be entitled to first base only if all other runners have advanced one base or more on the play, in which case the balk is disregarded. If the batter-runner and all other runners do not advance, the balk penalty prevails, the batter must return to the batter’s box with the previous count, and runners advance one base as penalty for the balk.
A runner who misses the first base to which the runner is advancing and who
is called out on appeal shall be considered as having advanced one base for the
purpose of this rule.
When a balk is made on a pitch that is a fourth ball it shall be ruled the same as when the batter hits a balk pitch and is safe on a hit or error, provided all runners advance at least one base on the play. Therefore, with a runner on first, first and second, or first, second and third, when a balk is called on the fourth ball, the batter goes to first base and all runners advance at least one base. If they attempt to advance more than one base, they do so at their own risk.
However, if first base is not occupied and all other runners do not advance at least one base on the play, the balk penalty prevails: The ball is dead; the batter returns to the batter’s box and assumes the same ball and strike count as before the balk pitch; and all runners are allowed to advance one base as penalty for the balk.
Note that in cases where a pitcher balks and throws wild, either to a base or to home plate, a runner may advance beyond the base to which such runner is entitled by the balk, at his own risk.

Videos Related to PENALTY FOR A BALK

Reds' Pitcher Steps Off Rubber and Delivers a Pitch...Is That Legal?

What Happens After a Balk? (MLB/OBR Rules)

The Mets and Cubs played at Wrigley on July 14th. In the bottom of the fourth inning the Cubs had Nico Hoerner on first base with two outs when Cubs manager David Ross claimed that … 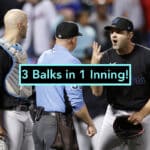 Three Balks in the Same Inning!

Rule 6.02 (a) (13) reads, “If there is a runner or runners on base, it is a balk when the pitcher delivers the pitch from Set Position without coming to a stop.” Just when you …

The Reds were batting in the bottom of the tenth with the score tied 1-1 on July 8, 2022. Tyler Naquin was facing Matt Wisler with runners on first and third and one out when …

Intermediate (50-70) Division/ Junior/ Senior/ Big League: If, with a runner on third base and trying to score by means of a squeeze play or a steal, the catcher or any other fielder steps on, …