There are two types of obstruction and a different mechanic is used with each type.

Note that this section of the obstruction rule (i.e., runner obstructed while play being made on such runner) also provides for cases when a thrown ball is in flight at the moment the obstruction occurs. In such cases, the umpire shall take into consideration the results of the throw when making the award. As an example, if a throw is in flight at the moment the obstruction occurs (umpire calls “Time”) and if the throw turns out to be wild and goes out of play, all runners will be awarded two bases (even though the umpire had called “Time” before the ball went out of play). In such cases as this, the umpires have the responsibility of determining whether a throw is made before or after the obstruction. If the umpire judges that a throw was made after the obstruction, the obstructed runner will be awarded only one base from the base such runner last touched at the time of obstruction. 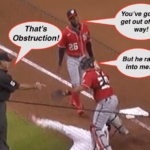 When the obstruction occurs, the umpire shall call or signal "Obstruction." (a) If a play is being made on the obstructed runner, or if the batter-runner is obstructed before touching first base, the ball is dead …

Collision Rule SECTION 7.      The rules committee is concerned about unnecessary and violent collisions with the catcher at home plate, and with infielders at all bases. The intent of this rule is to encourage …

2-22-1   Obstruction is an act (intentional or unintentional, as well as physical or verbal) by a fielder, any member of the defensive team or its team personnel that hinders a runner or changes the pattern of …