SECTION 16. The act of a fielder in getting secure possession in the hand or glove of a ball in flight and firmly holding it, providing the fielder does not use the cap, protector, pocket or any other part of the uniform in getting possession.

1) When the momentum of the catch is complete; i.e., the fielder has reversed his direction and is running the ball back toward the infield or;

2) When the fielder is reaching for the ball to make a throw.

a. It is not a catch if, simultaneously with or immediately after contact with the ball, the fielder collides with a player or fence or falls down and, as a result, drops the ball.

b. It is not a catch if a fielder touches a fly ball that then hits a member of the offensive team or an umpire and then is caught by that fielder or another defensive player.

c. If the fielder has made the catch and drops the ball while in the act of making a throw (i.e., reaching for the ball in the glove) after the catch, the ball shall be judged to have been caught.

d. It is not a legal catch if either foot is touching dead-ball territory when the catch is made (see 6-1-d-4).

The official definition of the “Catch” rule that is referenced in this report: A CATCH is the act of a fielder in getting secure possession in his hand or glove of a ball in flight and …

An INFIELD FLY is a fair fly ball (not including a line drive nor an attempted bunt) which can be caught by an infielder with ordinary effort, when first and second, or first, second and …

Gloves or Mitts SECTION 13.      a. The catcher may wear a glove or mitt of any dimension. b. The first baseman’s glove or mitt must not be more than 13 inches long or 8 inches …

New Fields SECTION 5. All new fields should be oriented with consideration to the following factors: protection of players (hitter, catcher, pitcher and others in that order); comfort of spectators; season of use (March-June); latitude (north … 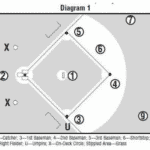 1-2-1 A diamond (or infield) shall be a 90-foot square. When measuring the distance to first base and third base, measure from the apex of home plate to the back edge of the base. The …