1-1-1 In high school baseball, each team is permitted seven turns at bat (see 4-2-2) during which it attempts to score runs by having its batters become base runners who advance to and touch first base, second base, third base and home plate. The team in the field attempts to end each turn at bat of the opponent by causing three of its batters or base runners to be out. Each of the two teams consists of at least nine players throughout the game (See Exception 4-4-1f), one of whom must be designated captain.

1-1-2 The captain and head coach represent the team in communications with umpires. The captain’s and head coach’s duties shall include: 1) providing the umpire-in-chief with his team’s lineup card which shall include the name, shirt number, position and batting order of each starting player, the name and shirt number of each eligible substitute should also be listed; and 2) informing all players as to special ground rules as announced by the umpire-in-chief. Lineups become official after they have been exchanged, verified and then accepted by the umpire during the pregame conference. The umpire shall not accept the lineup card until all substitutes are listed. There is no penalty assessed. 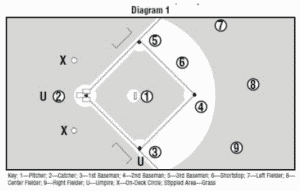 1-1-3 A player is designated on the line up card and in the scorebook by name, shirt number, batting order position and fielding position. A customary arrangement of the fielders is shown in Diagram 1.

1-1-4 At the time of the pitch, all fielders shall be on fair ground except the catcher who shall be in the catcher’s box. A fielder is in fair ground when at least one foot is touching fair ground. PENALTY: Illegal pitch. (2-18)

1-1-5 A player may change to a different fielding position at any time except that a pitcher, after being listed as such on the official lineup card handed the umpire, cannot change until conditions in 3-1-1 and 3-1-2 are met. Changes should be reported to the umpire-in-chief and scorekeeper.

Catch SECTION 16. The act of a fielder in getting secure possession in the hand or glove of a ball in flight and firmly holding it, providing the fielder does not use the cap, protector, pocket …

Catcher SECTION 17. The fielder who takes a position behind home plate.

2-28-1   The pitcher is the player who is designated in the lineup as being responsible for delivering (pitching) the ball to the batter. 2-28-2   A live ball delivered to the batter is a pitch. The term implies a …

2-9-1   A catch is the act of a fielder in getting secure possession in his hand or glove of a live ball in flight and firmly holding it, provided he does not use his cap, protector, …

7-1-1   Each player of the team at bat shall become the batter and shall take his position within a batter’s box, on either side of home plate, in the order in which his name appears on …