Runner is Hit by a Batted Ball. Safe or Out? It Depends…

There’s a perception that when a runner is hit by a batted ball, he is always out. Not true. Runners are struck by batted balls in a variety ways. If this occurs when the runner is hit in front of an infielder, who is attempting to make a play, he is called out for interference because he hindered or impeded the fielder from making a play.

This happened when the Royals hosted the Angels on April 14, 2021. In the bottom of the first the Royals had the bases loaded and two outs when Michael Taylor, facing Griffin Canning with a 3-2 count, hit a rocket that struck Carlos Santana in front of Angels’ third baseman Jose Rojas. Because of the count and the number of outs, all runners were moving with the pitch. Third base umpire Alan Porter made the call per rule 5.09 (b) (7). Taylor was credited with a hit on the play. That’s a scoring rule I never understood. In this situation the batter is credited with a hit during a play in which his teammate was called out for interference. And the pitcher is charged with giving up a hit and a potential earned run. See scoring rule 9.05 (a) (5).

You can view the entire play by going to the link below:

Third Base Runner Hit by a Batted Ball

It’s not often you will see a runner on third hit by a batted ball, but the Cardinals’ Justin Williams was victimized by the rule when the Redbirds hosted the Brewers on April 10.

Williams was leading off third close to the foul line when Tommy Edman’s hit a sizzling ground ball that struck Williams. Plate umpire Alan Porter ruled that Williams was hit in fair territory. It’s difficult to see on the replay if he was in fair or foul territory. Remember, the plate umpire would have to go by the location of the ball when it made contact with the runner. If the ball was in foul territory and hit the runner whose body was partially in fair territory, it would be a foul ball. Fair or foul batted balls between home and first and home and third are not reviewable.

Rule 6.01 (a) (11) reads in part, “It is interference by a batter or a runner when a fair ball touches him on fair territory before touching a fielder. If a fair ball goes through, or by, an infielder, and touches a runner immediately back of him, or touches the runner after having been deflected by a fielder, the umpire shall not declare the runner out for being touched by a batted ball. In making such decision the umpire must be convinced that the ball passed through, or by, the fielder, and that no other infielder had the chance to make a play on the ball…”

So, when a runner is hit by a batted ball behind an infielder, and no other fielder has a chance to make a play on the ball, the ball remains alive and in play. When this occurs, the runner should continue to run. Because it’s seldom that this kind of play takes place, it sometimes catches the umpires by surprise. The following play is a good example.

The Royals hosted the Cardinals on Aug. 14, 2019. The Cardinals had the bases loaded and no outs in the top of the seventh. The Royals had the infield in when Cardinals’ rookie Randy Arozarena hit a ground ball that just got by Royals’ shortstop Nicky Lopez. The ball then struck Yadier Molina, who was running from second to third. Molina initially slowed down thinking he was out after plate umpire Greg Gibson incorrectly called “Time.” Gibson apparently reacted instinctively when he saw the ball hit Molina. But Gibson realized his mistake and explained to Royals’ manager Ned Yost that the ball should have been kept alive because Molina was struck by the ball behind the infielder (Lopez) and no other fielder had a chance to make a play on the ball.  The call was reversed allowing Matt Carpenter, the runner on third, to score and Molina to occupy third base. Arozarena had collected his first major league hit in a most unusual way. 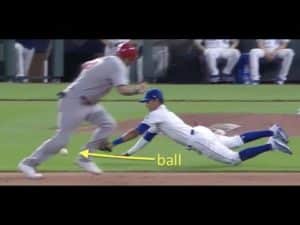 Yadier Moilna touched by batted ball after it passed infielder

Runner Hit By Batted Ball – Not always Out!

Ball Deflects off a Fielder and Strikes the Runner

A runner should not be called out when struck by a batted ball that deflects off a fielder, including the pitcher. The runner is not out unless the fielder near the ball has a chance to make a legitimate play on the ball and the runner interferes with the fielder.

Deflected balls that strike the runner are rare. I had to go into my dusty archives to find this one.

The Reds hosted the Dodgers on June 19, 2008. In the bottom of the seventh inning, Paul Bako was batting with Joey Votto on first. Bako hit a shot that went off the glove of Dodgers’ first baseman James Loney and struck Votto. Fortunately for the Reds, Votto continued to run, and the ball remained in play. If the Dodgers second baseman could have made a play on the ball, then Votto could have been called out for interference.

Ball Strikes Runner on a Base

With the exception of an Infield Fly Rule situation, if a runner is struck by a batted ball while occupying a base, he should be called out if he is interfering with a fielder who is attempting to make a play. But let’s say there’s a runner on third base and the batter hits a slow roller near the foul line that the third baseman is hoping will go foul. The ball remains fair and makes contact with the runner who is standing on third base. Because the third baseman was not attempting to make a play on the ball, the runner should not be called out.

If you look at the first play in this report, Santana wasn’t far from third base when he was hit by the ball. If he had reached the base and was on the bag when he got hit, he would have been called out because he was impeding an infielder from making a play.

If the umpire judges that a runner intentionally gets hit by a batted ball to break-up a DP, both the runner and the batter-runner are out under rule 6.01 (a) (6). No runner can advance or score on the play.

Runner Called Out After Fielder Vacates His Position

Rule 6.01 (a) (11) has its quirks. The Rangers and Red Sox played at Fenway Park on May 21, 2015. In the bottom of the fifth, the Sox had Xander Bogaerts on first base and one out when Daniel Nava hit a sharp ground ball between first and second on a hit and run play. Rangers’ second baseman Adam Rosales vacated his position to cover second base. The ball struck Bogaerts, but no call was initially made by second base umpire Mike Muchlinski. The umpires huddled and agreed that Bogaerts was struck by the ball and he was called out. Nava was given first base.

But that is the official MLB interpretation of a play where a runner advancing to the next base is struck by a batted ball in the area that is vacated by the infielder. This can also happen with a runner going from second to third when the third baseman comes in to play a bunt and the shortstop goes to cover third base. If the runner is hit by the batted ball, he is out.

In essence, the rule gives the defensive team a phantom fielder in this situation.

But a rule is a rule!

These plays can be a problem since they happen so infrequently. Even the “seasoned,” experienced pro umpires had to get together and talk about it. Last year, on our annual test, there was a question about the pitcher deflecting the ball toward third base with a runner advancing there. As a result, the runner, who is sliding, unintentionally interferes with the third baseman trying to make a play on him with the deflected ball. A lot of umpires got this wrong because they said the runner was not out. The runner IS out because he interfered on a fielder trying to make a play. Umpires will argue about this, and coaches will go ballistic, but it is the right call. The runner is out for interference, the ball is dead, and the batter gets first base.

Get free access to baseball forums, rules analysis and exclusive email content from current and former Major League Baseball players and umpires.
SIGN UP FOR FREE
Go to mobile version