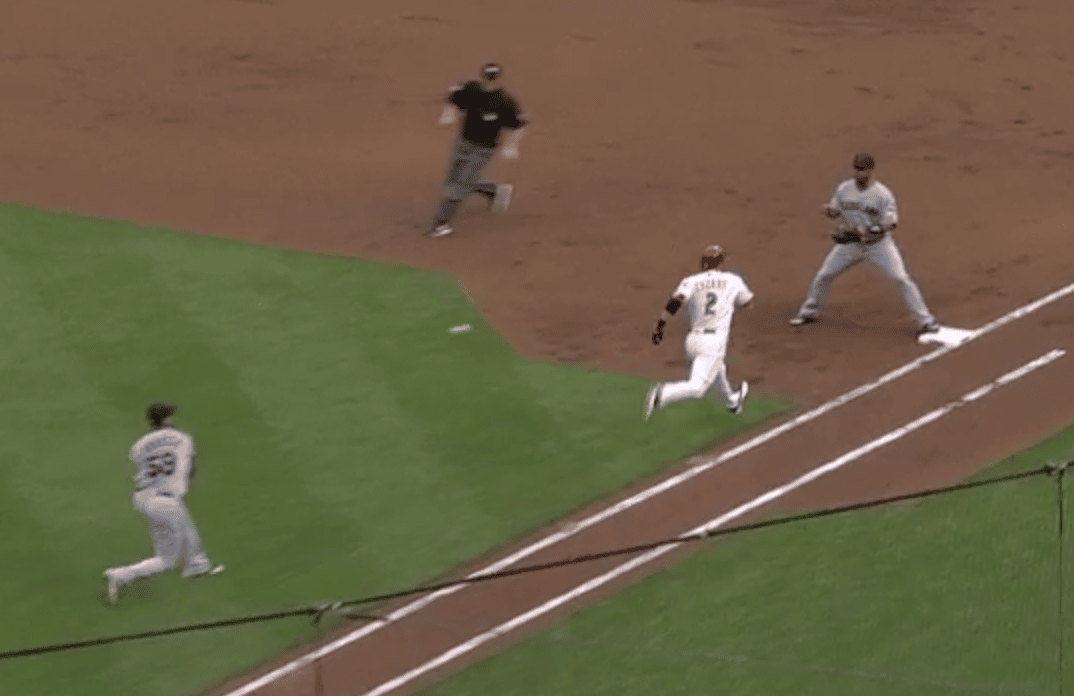 In my opinion Carrasco had enough of a throwing lane to first base but he threw the ball at Cozart with the intention of picking up the interference call and succeeded. But you cannot read intent into the rule even though umpires often are aware that there was intent to hit the batter-runner.

(7) The batter-runner is not to be charged with interference if he is running out of the box if the defensive team has had ample room or a good throwing lane to make the play even if he is struck by the ball. This is not part of the rule but in my opinion how the rule has been umpired. Seldom do you see the rule invoked when a throw is coming from the left side of the infield or the second baseman.

Provision No. 7 above deals with the defensive team having an ample throwing lane despite the illegal presence of the batter-runner. This is a point that is not part of the rule and not all umpires will agree on the idea. This is an interpretation that I gathered over the years from interaction and discussion with umpires. Some umpires will tell you that batter-runners who are running out of the lane get no benefit of the doubt. Yet you seldom see the call made when the throw is made

from the left side of the infield or even when the second baseman makes the throw. So apparently, having an ample throwing angle is a factor.

In describing the throwing angle where Carrasco made his throw to first base in the Cozart play, one umpire agreed that it was a gray area. Carrasco wasn’t in the typical bunt area between home and first and yet he wasn’t on the third base side of the mound.

To summarize, I think most umpires would have made the same call. But although I may be in the minority, throwing angle might be an unspoken factor. To be safe, the batter-runner should run in the runner’s box the last 45-feet between home and first. Also, it is my opinion and others that the batter-runner interference rule is most likely the worst rule in the book. It is a convoluted rule that is inconsistently applied maybe because there are mixed signals because of the inconsistent application and multiple layers of the rule.