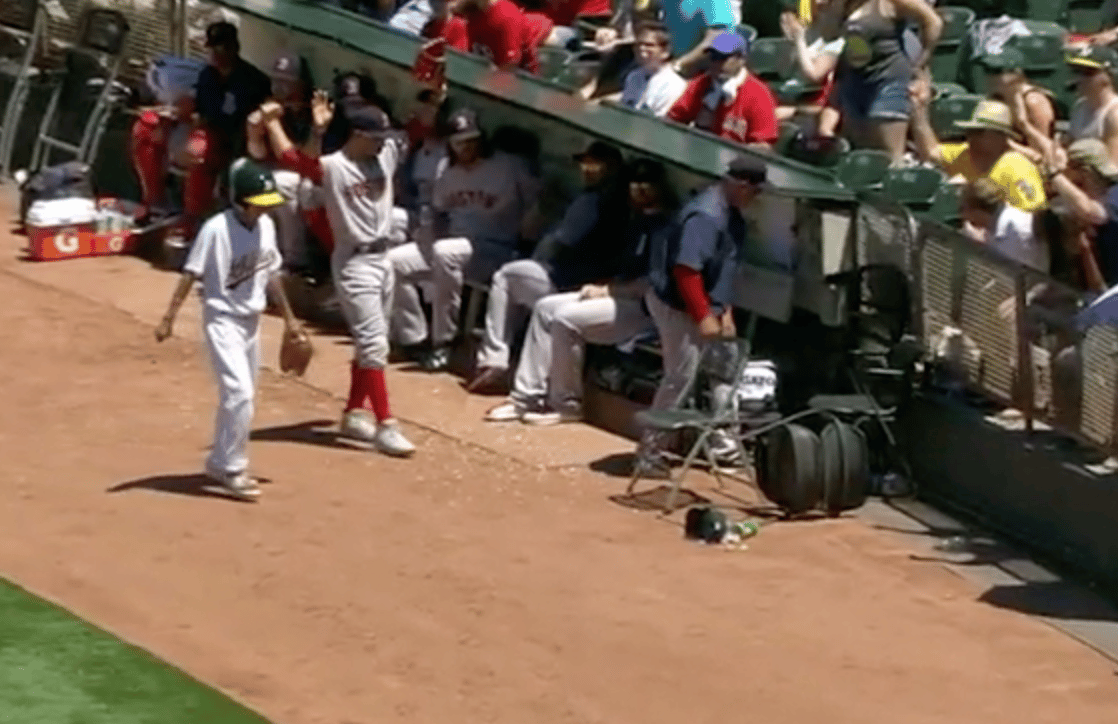 According to rule 5.06 (G), when a wild throw by an infielder goes out of play or under a bench, the umpires must distinguish if it’s the “first play” or “second play” by the infielder. Remember, by rule, the fielding of a ground ball, line drive or fly ball is not the “first play.” What the fielder does following that is considered the “first play.” Running to a base to retire a runner, attempting to tag a runner, or making a throw are all “first plays.” A feint or fake throw is not considered a play.

In rare situations the umpires must decide whether or not all runners, including the batter-runner, advanced at least one base before a “first play” throw was made into dead ball territory in which case a two base award is invoked for all runners based on their position on the bases at the time of the throw.  If this occurred, the batter-runner would be awarded third base-a rare base award. This almost happened this past Saturday in the A’s-Red Sox game that I will cover below.

“First Play” in the infield

If it’s the “first play” in the infield, all runners are awarded two bases from their position at the time of the pitch.

Example: Jones is on first and no outs. He is going with the pitch when the batter hits a ground ball to the shortstop. The shortstop air mails the throw into the stands. At the time of the throw, Jones had reached second base. Jones would be awarded two bases from his position on the bases at the time of the pitch and would be sent to third base and the batter would be awarded second base because the wild throw was the result of the “first play” which was the throw, not the fielding of the ground ball.

“Second Play” in the infield

If it’s the second play in the infield, all runners are awarded two bases from their position at the time of the throw if the throw goes into dead ball territory.

Example: Jones on first and no outs. Jones is going with the pitch when the batter hits a ground ball to the shortstop. The shortstop attempts the 6-6-3 double play by running to the base (first play) but Jones beats the shortstop to the bag The shortstop then fires the ball (second play) into dead ball territory. Jones is allowed to score and the batter-runner would be awarded second base. Jones would be awarded two bases from the point of the throw that went into the stands because it was the “second play” in the infield.

All Runners Advanced One Base at the time of the Throw

5.06 (G) APPROVED RULING: If all runners  including the batter-runner, have advanced at least one base when an infielder makes a wild throw on the “first play” after the pitch, the award shall be governed by the position of the runners when the wild throw was made.

This is a very rare base award. An example would be the following: There are runners on first and second and no outs when the batter bunts the ball up the first base line. The catcher bobbles the ball in his attempts to pick it up. By the time he recovers the ball and throws to first base, the batter-runner has reached the base and the runners on first and second have both advanced one base. The ball gets by the first baseman and rolls into dead ball territory under a bullpen bench along the right field line. Because all runners, including the batter-runner advanced one base before the throw, all runners would be awarded two bases from the base they had reached at the time of the throw even though it was only the “first play” in the infield.” Score the runners and send the batter-runner to third.

With one out in the bottom of the second inning the A’s had Trevor Plouffe on second and Chad Pinder on first with one out when Josh Phegley connected on a check-swing grounder that Red Sox catcher Christian Vazquez threw wildly past first base. Both runners crossed home plate, but Pinder, the runner on first at the start of play, was ordered back to third base when the ball was deemed dead in the visitors’ bullpen. The runners were awarded two bases from their position at the time of the pitch because Vasquez’s throw that went into dead ball territory was the “first play” in the infield and all runners, including the batter-runner, did not advance the necessary one base before the throw. Phegley was forced to return from third to second.  A’s manager Bob Melvin argued and was ejected by umpire Mike Winters.

“That’s a ground rule. They were right about that,” Melvin said. “My issues weren’t with the ground rule. If it’s fan interference, then they can place them. It’s a judgment call. I had other issues.” Melvin did not elaborate but I think it involved an earlier play in the inning.

The clip below will give you an excellent view of the position of all three runners at the time of the throw. Notice-

You can view the play by going to the link below.

Did Pitcher Throw at Runner for Interference Call?