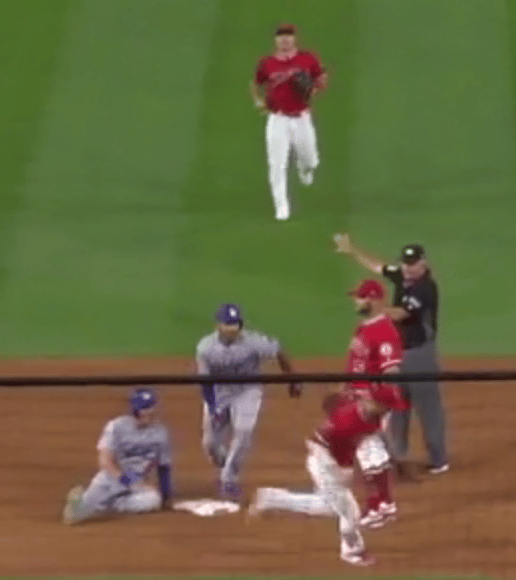 The Dodgers and Angels played in Anaheim on July 6th.  In the top of the sixth the Dodgers had Justin Turner on second and Cody Bellinger on first with one out when Matt Kemp singled to left scoring Turner.  Justin Upton fielded the ball and fired to the infield.  Bellinger was caught in a rundown between second and third and was called out by umpire Tim Timmons for running out of the baseline as he tried to avoid the tag of second baseman Ian Kinsler.  But Bellinger kept running to second base, apparently not aware that he was called out.  And Kinsler chased him back to second, apparently not aware that Bellinger was a dead runner.

Meanwhile Kemp reached second base where he was greeted by Bellinger.  For a brief time both Bellinger and Kemp were on second base together.

When the smoke cleared the Dodgers had Matt Kemp on first base with two outs and one run across the plate.

You can view this wild play by going to the link below.

or go to MLB.com, July 6, MUST C Curius: Bellinger’s, Kemp’s adventure on the bases.”

The play was a circus with several rules involved.

2. The fact that Bellinger continued to run after being retired, was not a violation. The Comment to rule 6.01 (a) (5) reads, “If the batter or runner continues to advance or returns to his last legally touched base after he has been put out, he shall not by that act alone be considered as confusing, hindering or impeding the fielders.”

3. Let’s say Ramirez’s throw to third base went into dead ball territory, Kemp would be awarded two bases from the last base he legally touched. The onus is on the defensive team to not make a play on a runner who is already put out.  Another example would be a situation in which the batter has a 2-2 count with a runner on first base and one out.  On strike three the ball gets by the catcher.  The batter is out because first base is occupied with less than two outs.  But the batter runs to first base anyway and draws a throw from the catcher who fires the ball down the right field line while attempting to make a play on the retired batter-runner.  The runner on first base ends-up on third base.  The fact that the batter-runner was out when he ran to first base does not constitute a violation.  Again, the onus here is on the catcher to know that the batter is already out.  The 6.01 (a) (5) rule also reads, “ If the batter or a runner continues to advance after he has been put out, he shall not by that act alone be considered as confusing, hindering or impeding the fielders.”

4. For a time, the Dodgers had two runners on second base (Bellinger and Kemp) but only Kemp was a live runner because Bellinger had already been called out. If Kinsler threw to Albert Pujols, who was near second base, Pujols would probably have tagged both runners who were on the base but no out would have been recorded because Bellinger was already out and Kemp had the right to the base.

5. When Kemp returned to first base, he ran by Pujols who was very close to Kemp’s running path. Kemp could have “head hunted” Pujols and picked-up the Type 1 Obstruction call which would have placed him on second base. Type 1 obstruction is called when the runner is obstructed by a fielder when there is a play being directly made on him.  The obstructed runner is awarded one base after the last legally base he had touched before the obstruction per rule 6.01 (h) (1).

6. Perhaps players need to pay more attention to an umpire’s signal. If the Angels’ defensive players observed Timmons’ out of the baseline call, it could have averted a virtually out of control mess.

Runner’s Lane Violations All Over MLB