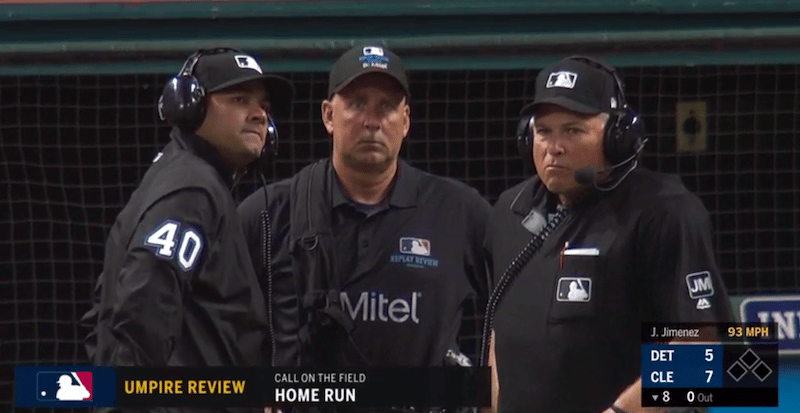 The Tigers and Indians played in Cleveland on Friday, June 21, 2019. In the bottom of the eighth, the Indians had a runner on first base and no outs when Jason Kipnis hit a ball that was originally ruled a home run by second base umpire Adrian Johnson. But the ruling was reversed after Tigers’ manager Ron Gardenhire challenged the call. It appeared the ball hit the yellow padding on top of the wall and bounded back onto the playing field where Tigers’ center fielder Jacoby Jones made a good recovery of the ball and fired it into the middle of the infield.

The Replay official awarded both runners three bases.  Jose Ramirez, the runner on first, was allowed to score and Kipnis was awarded third base.

You can view the play by going to the link below:

Hosmer tagged out while jogging on Machado “Home Run”

The Padres hosted the Braves on June 19, 2019. With one out and runners on the corners in the second inning, Manny Machado sent a deep drive to left-center. The ball caromed off the top of the wall, hit a crease between two different padded portions of the wall and bounded back onto the field of play.

Eventually, Machado and Tatis, the runner on third, realized the ball might still be live, and ran full speed. Tatis scored from 3B, and Machado cruised into 2B. But Eric Hosmer, the runner on first, continued his slow trot toward 3B thinking the ball was a home run.

Brewers’ outfielder Lorenzo Cain fielded the ball and threw to shortstop Orlando Arcia, who relayed to Travis Shaw at 3B. Shaw tagged Hosmer for the out.

The play went to replay review, where the ruling of no home run was confirmed.

If the ball had struck between the two padded portions in right field, it would’ve been ruled a home run. However, in left field, there are no such ground rules at Petco Park. Thus, any ball that clears the fence is a homer, and any ball that doesn’t — regardless of which portion of the wall it hits — is live.

“It is what it is, they’re our ground rules,” said Padres manager Andy Green. “There’s no reason to sit here and split hairs with it. It didn’t play favorably for us today. Obviously today, I would’ve liked it to be a home run.”

You can view the play by going to the link below:

Unless provided otherwise by a local ground rule, a fair ball striking the top of the outfield wall and bounding back onto the playing field is treated the same as a fair fly ball that strikes the outfield wall and rebounds back onto the playing field. The ball is no longer in flight and cannot be caught for the out, but it is playable. This is what occurred in the above plays.

In Play No. 1, Ramirez was going with the pitch and ran hard all the way. Most likely this is why the Replay Official awarded him three bases. The Tigers’ staff, however, was surprised that Kipnis was also awarded three bases. According to one source, “Kipnis did not run out of the box hard because he thought he hit it out of the park. And when the ball came into the mound area, Kipnis was approaching second base. Why should he be placed at third base?” Is it possible the incorrect home run signal by the umpire affected the actions of the runner? Or was it poor judgment by the Replay Official as to the placement of the runner? This is always possible and there’s no recourse. The Replay Official is empowered to place the runners to the base they would have made had the correct call been made originally.

In Play No. 2, there was no reason for Hosmer to slow down as he jogged into an out. The umpires made no signal that would cause the runners to slow down and it would be the responsibility of the runners and the base coaches to play it live. Did the runners, especially Hosmer, know the ground rules in their own park and the wall rules that are currently being discussed?

Coaching Note: A home run or ground-rule double should never be assumed by runners, fielders and base coaches. Instruct your players to run hard until the play is definitely.