(2) Batter-runner is obstructed before reaching first base with no play being made on him (for example, on a ball hit to the outfield).
Ruling: Call the obstruction by pointing at the infraction and calling, “That’s obstruction”; however, leave the ball in play until the play is over. Then impose such penalties, if any, that will nullify the act of obstruction. If fly ball is caught in this situation, the batter-runner is out. If the batted ball was a fair ball not caught, the batter-runner will always be “protected” at least to first base.

(8) Runner on second base, no outs. Pitcher attempts a pickoff at second, and the runner gets in a rundown between second and third. During the rundown, the runner is obstructed by the third baseman while a throw is in flight from the shortstop. The shortstop’s throw is wild and goes into the dugout.
Ruling: The runner is awarded home (two bases from the runner’s position at the time of the throw). The runner was obstructed while a play was being made on him (“Type 1” obstruction), and the umpire should call “Time” at the moment the obstruction occurs. However, under the Comment to Official Baseball Rule 6.01(h)(1), if a thrown ball is in flight before the obstruction is called by the umpire, runners shall be awarded such bases on wild throws as they would have been awarded had no obstruction occurred. Therefore, even though the runner was obstructed while a play was being made on him, in this situation the runner is awarded two bases from the time of the throw (and not the customary “at least one base beyond the base he last legally touched before the obstruction”).

(11) Runner on third base, one out. Batter hits a fly ball to right-center field, and the runner goes back to third base to tag up. Third baseman approaches the runner, faces him, and jockeys back and forth, intentionally trying to block the runner’s view of the fielder catching the ball.
Ruling: This is obstruction under Official Baseball Rule 6.01(h)(2). The umpire should call the infraction when it occurs and award bases, if any, in the appropriate manner.

(12) With a runner on first base, the first baseman—rather than holding the runner in the traditional manner—jockeys back and forth in front of the runner, several feet to the second base side of the bag. In the umpire’s judgment the first baseman is doing this intentionally to block the runner’s view of the pitcher.
Ruling: While Official Baseball Rule 5.02(c) allows a fielder to position himself anywhere in fair territory, if the umpire deems the fielder’s actions are a deliberate effort to block the runner’s view of the pitcher, it is illegal and clearly not within the spirit of the Rules. The first baseman should be warned to stop, and if he persists, he is subject to ejection.
(13) Runner on first base is stealing, no outs, no count on the batter. Pitcher pitches out. Batter, observing the pitch-out, intentionally throws his bat at the catcher in a feigned swing, and the bat strikes the catcher as he is catching the pitch or attempting to throw. Batter remains in the batter’s box during this time.
Ruling: Interference. Batter is declared out unless the catcher’s initial throw retires the runner, in which case the play stands.

(14) Runner on first base is stealing, three balls on the batter. The next pitch is a check-swing that the plate umpire initially rules a ball. The batter-runner takes off for first base and in so doing interferes (out of the batter’s box) with the catcher’s throw to retire the runner attempting to reach second. Runner is safe at second. An appeal is made to the base umpire regarding the check-swing, and the base umpire rules a swing.
Ruling: Batter’s interference. Batter is declared out and runner returns to first base. Note that if this situation occurred with two strikes on the batter, then both the batter and runner are declared out. (See the last paragraph of Interpretation #66.)

Batter Goes Deep then Fight Breaks Out During HR Trot

Obstruction! If you don't have the ball, get out of the way! 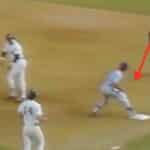 Runner's Interference when Runner Takes Throw Off his Head

When a Runner Attempts to Steal Home

The Nats hosted the Phils on June 17th in the second game of a doubleheader. The game won by the Phils 8-7, was marred with controversy that led to the ejection of Nats’ manager Dave …

When a batter hinders a catcher making a play, it is basic batter interference. It usually happens that a batter swings at a pitch, misses and then falls into the space of the catcher who …

The Royals and Indians played in Cleveland on June 4, 2016. In the top of the first inning, the Royals’ Whit Merrifield attempted to steal second base with Lorenzo Cain at bat. At almost the time …

Drop a Knee - When Can a Fielder Block a Base?

You see it all the time, a stolen base attempt, the fielder gets to the base before the runner then drops his knee, foot or leg in front of the base to keep the baserunner …

The Yankees and Red Sox played at Fenway on July 8th when Boston’s Rafael Devers was involved two plays worthy of attention. In the bottom of the second, Devers was batting with runners on first and …

The Right of Way

It’s imperative that players on both sides of the ball understand when they have the “Right of Way.” When a fielder is attempting to make a play, the runner must avoid him. And  when a …

The Runner's Right of Way Rule....Did the Umpires Apply it Wrong?

The Guardians hosted the White Sox on April 21. In the bottom of the seventh, the Guardians had Josh Naylor on second with no outs when Ernie Clement hit a chopper to Sox shortstop Tim …

There are two types of umpire interference: (1) When a field umpire (the second base umpire) is positioned in front of the infielders and is struck by a batted ball that is not deflected off another …

It is interference by a batter or runner when - (a) the batter hinders the catcher in an attempt to field the ball; (b) the batter intentionally deflects the course of a foul ball in any manner; (c) …

2-21-1   Offensive interference is an act (physical or verbal) by the team at bat: which interferes with, obstructs, impedes, hinders or confuses any fielder attempting to make a play; or when a runner creates malicious contact …